Millcreek Township has begun the process of amending its Comprehensive Plan, Embrace Millcreek, to include the recently completed Presque Isle Gateway District Plan and to update the Future Land Use Map to be consistent with the newly adopted Zoning Ordinance. During the update process, two Planning Commission meetings will be held, both at 5:30 PM in the Municipal Building Assembly Room. The first, on Tuesday September 6, 2022 will feature a presentation of the amendment to the Commission. At the second meeting, on Tuesday October 4, 2022, the Commission will be asked to send their recommendation on the amendment to the Board of Supervisors. The Supervisors will hold a Public Hearing on the amendment at their regular meeting on Tuesday October 11, 2022 at 9:30 AM in the Municipal Building Assembly Room. On this page you can read on to find out more information on the amendment, and scroll down to find links to the Presque Isle Gateway District Plan and the proposed updated Future Land Use Map. There is also a list of Frequently Asked Questions at the bottom of the page.

In 2016, the Township began the process to develop a Comprehensive Plan. Over the course of the next two years, Millcreek residents were encouraged to participate in online surveys and to give their input during open houses, informational meetings, and public hearings. The Comprehensive Plan was adopted on August 28, 2018, with the title “Embrace Millcreek.” There was a strong current that ran through much of the public engagement process centered around Presque Isle State Park. It became clear that Township residents were proud that Millcreek served as the access point to the State Park, that Presque Isle was an important part of Millcreek’s identity, and that the area surrounding such a precious natural wonder, one that draws over 4 million annual visitors, should be invested in, and enhanced for the benefit of regional residents and visitors alike. This idea was so often repeated and supported by the community that the creation of a Presque Isle Gateway District was one of the five focus areas of the Comprehensive Plan.

Embrace Millcreek included a detailed series of action steps to help implement the goals proposed in each of the five focus areas. One of these action steps was to “Develop a detailed sub-area plan for (the) Presque Isle Gateway.” In March of 2021, Millcreek hired Ingalls Planning and Design to work with Township staff and engage with the public to develop this plan.

After holding a series of kickoff meetings and discussions with Ingalls Planning, in June of 2021, the Township publicized a website with a mapping tool prepared by Ingalls to gather input and ideas from residents on what they’d like to see in the district. Participants were able to submit their input by placing pins in a map representing either an issue, an asset, an opportunity, or a theme idea for the area, and then providing detailed comments and suggestions which were attached to that pin. This web tool was open through the end of that July 2021 and gathered over 270 responses.

Using the ideas generated from the public, as well as through meetings with Township staff, area stakeholders, and a regional technical advisory committee, the team at Ingalls prepared concepts for the district. These concepts were shared with an internal project team that included the Board of Supervisors and were revised and refined through several meetings during the fall of 2021.

At the beginning of February of this year, the Township again publicized a website dedicated to the project, this time asking for input on the draft concepts that resulted from the initial survey and team meetings. This survey was open until the end of February and resulted in over 325 responses. All of us here at the Township were encouraged that most comments were positive and if was often repeated that this area was overdue for investment and improvement.

Ingalls staff incorporated the public comments on these draft concepts, as well as final comments from the project team, stakeholders, advisory committee, and staff and presented a draft plan to the Township in March. The draft was reviewed internally and the Ingalls team produced a final version of the plan, dated May 2022.

Considering that creating a Gateway District is one of the focus areas of Embrace Millcreek, the Township intends to amend the Comprehensive Plan to include the Presque Isle Gateway District Plan. Additionally, while the Township is taking time to amend the plan, this is the perfect opportunity to update the Future Land Use Map, which a component of the plan’s Appendix. The draft Future Land Use Plan represents changes made to land uses while responding to public input received during the adoption the Township’s new Zoning Code in April of this year. Updating the Future Land Use Map will ensure that it is consistent with the Township’s new Zoning Map. 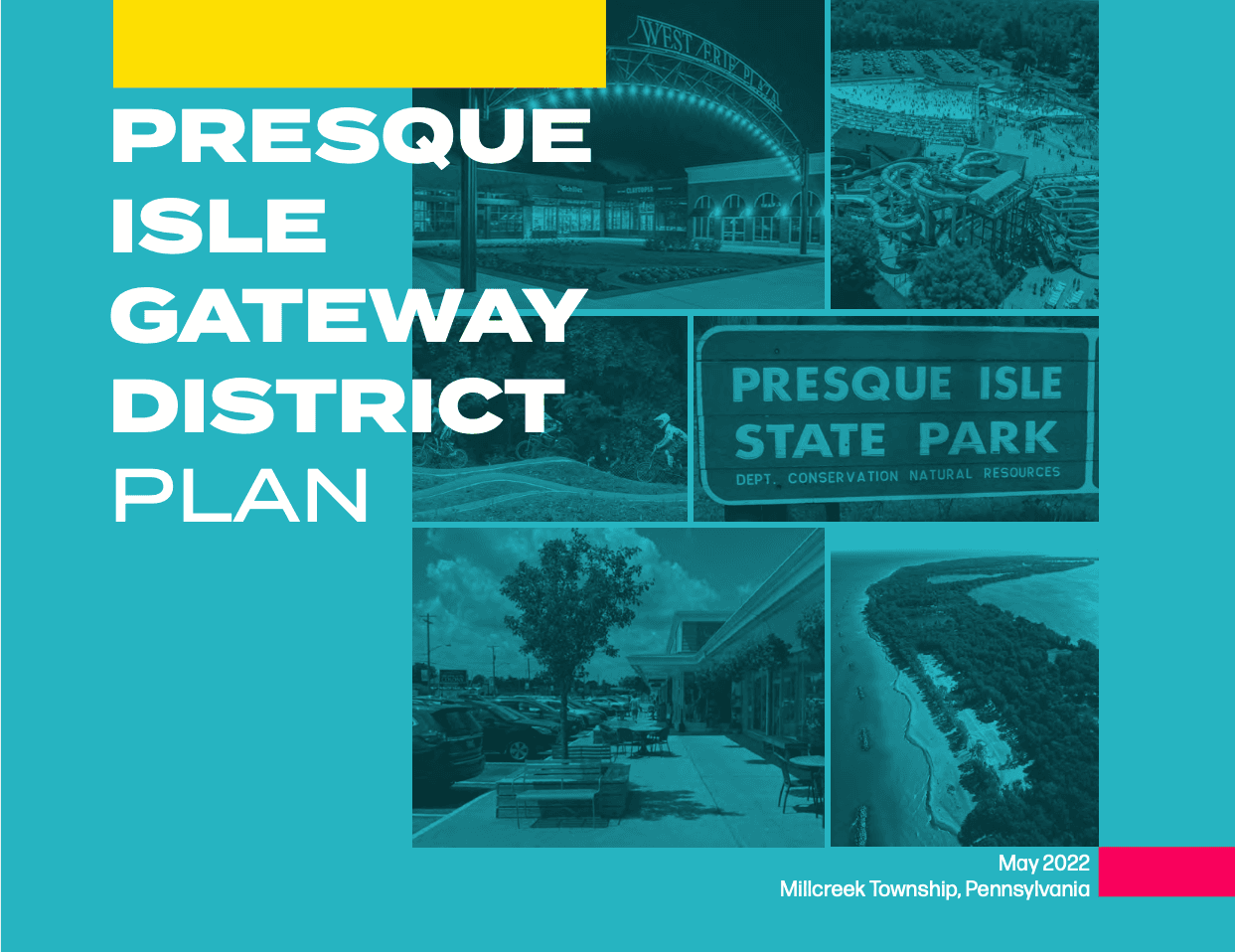 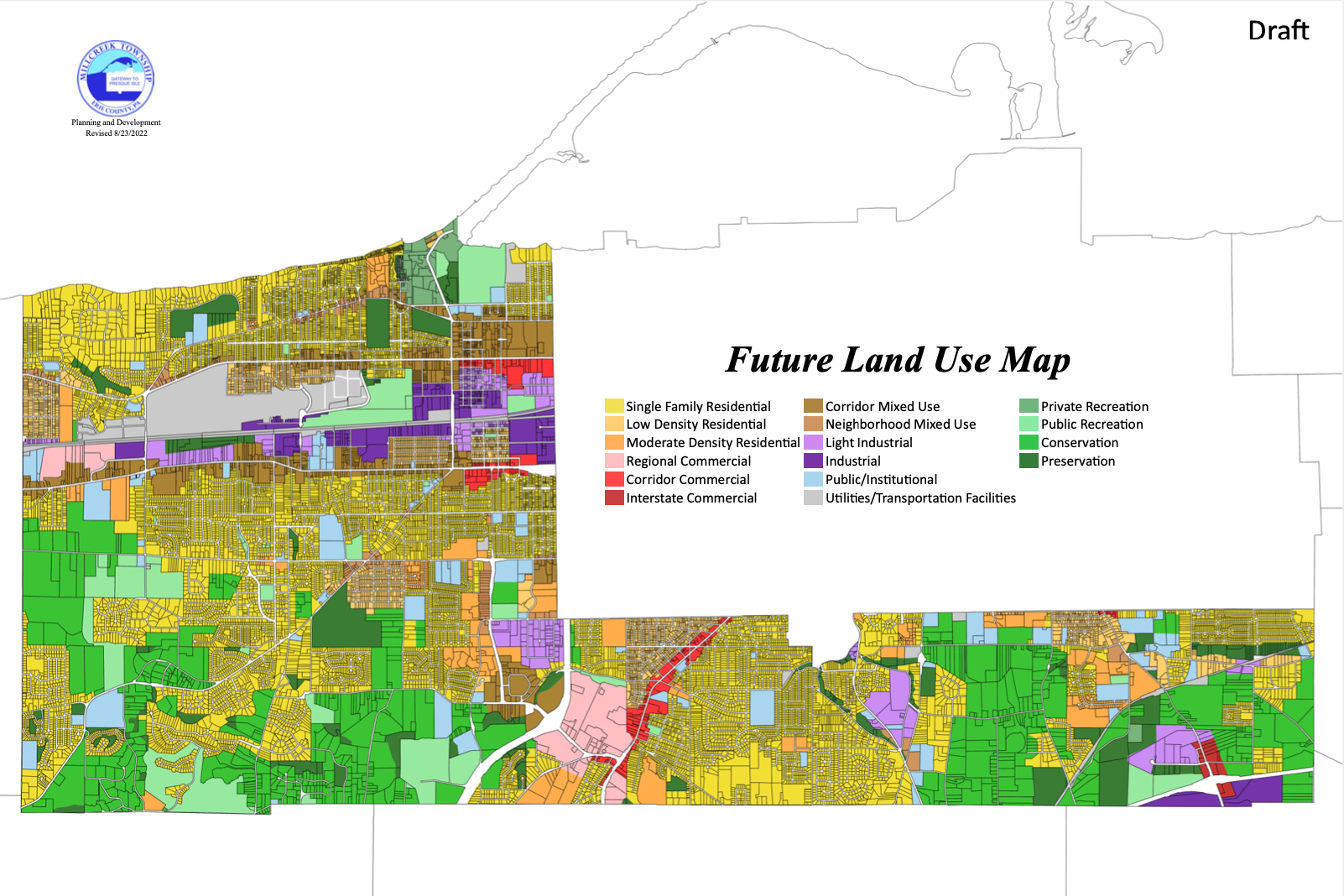