The Millcreek Township is a township in Erie County, Pennsylvania, United States. The population was 53,515 at the 2010 census. It is the largest suburb of Erie, Pennsylvania and the ninth-largest municipality in the state; larger than the cities of Altoona and Harrisburg.

Millcreek Township is home to the Millcreek Mall and portions of busy Peach Street, the entrance of Presque Isle State Park, Waldameer Park and many other attractions. Also located in the township is Erie International Airport, the major airport serving the Erie metropolitan area. 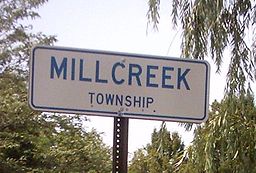